There are several communities throughout our region of southern Illinois that take great pride in showcasing their take on fine arts, music, and theatre. Many don’t know it, but Belleville is home to the nation’s second-oldest continuously operating philharmonic orchestra. The Belleville Philharmonic Society has been in existence since 1866 and hosts several performances each year. Midwest Salute to the Arts is a long-running art show that can be found in Fairview Heights each August. For over 30 years, Midwest Salute to the Arts has showcased all kinds of art from glass and mixed media to clay and jewelry. Belleville is very well known for Art on the Square, a juried fine art show that features 100 different artists and is consistently one of the top-rated art shows in the nation each year!

Fairfield plays host to the Fairfield PaintOut each year, which brings hundreds of folks to town over several days to paint local subjects to be judged in a show. Some of the most unique art you’ll ever see can be found in Palestine, where S.D. Meadows Folk Art Gallery has their unique pieces showcased not only in their shop, but also throughout town. Owner Steve Meadows takes pride in repurposing almost anything and turning it into furnishings, pottery, collectible items, and more!

For those looking to go on a scavenger hunt for art, look no further than Marshall! There are over 25 murals and more than 40 beautifully painted lion statues (the town mascot) scattered throughout town. For fans of live theatre, there are several opportunities to enjoy a production in Downstate Illinois. The Alfresco Art Center in Granite City usually puts on a few very notable shows each year, along with several other events that attract folks from miles around. For the last twenty years, the Salem Community Theatre and Cultural Center has provided visitors the chance to see live performances, music, movies, and more in an iconic art deco-style venue full of Egyptian architectural details.

The Hettenhausen Center for the Arts on the campus of McKendree University in Lebanon is another hot spot for arts and culture. Commonly called “The Hett,” this location plays host to everything from live theatre to music, as well as presentations and even movie screenings. Another community theatre that is a staple in Breese is the Clinton County Showcase, which hosts multiple live shows each year at the historic Avon Theatre. Another extremely popular theater in Downstate Illinois is strictly for movies! The Drive ‘N Theatre in Jasper County is one of just a few remaining drive-in movie theaters in southern Illinois, and prides itself on showing new movies and classics to folks from counties around since 1953.

For more information on art and culture in Downstate Illinois, click here! 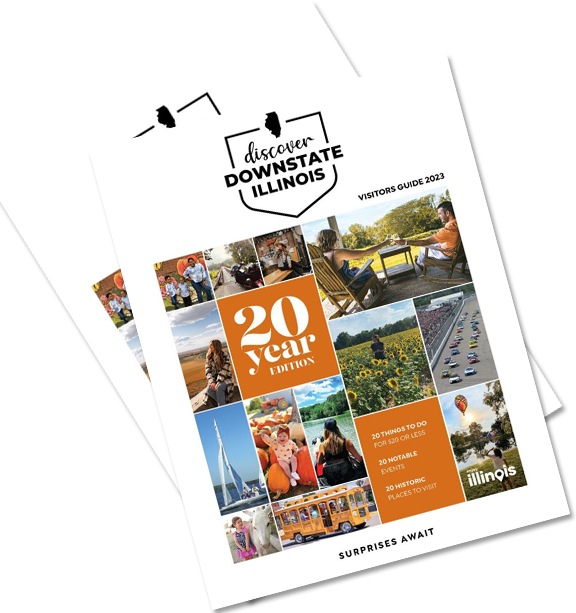